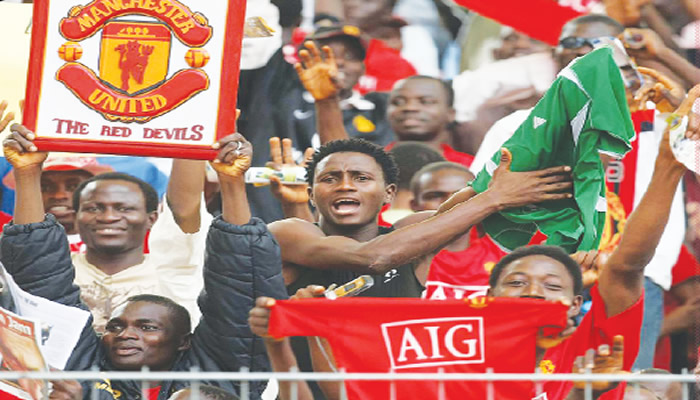 Manchester United find themselves bottom of the league for the first time since 1992 after their drubbing at Brentford and face Liverpool next in what should be a worrying sign for new manager Eric Ten Hag.

This has put the record English champions in the spotlight for the wrong reasons. Globally, their fans have become target of rival fans, who mock and taunt them over the ‘misfortune’ of the Red Devils.

The social media, especially, has been abuzz with funny jokes and emojis of United’s slump, which has been on for years.

Even United fans themselves have expressed their displeasure over the poor start of their team to the season.

The Red Devils began the new season with two defeats – a 2-1 defeat to Brighton at Old Trafford was followed by a sobering 4-0 hammering at Brentford.

United goalkeeper David De Gea admitted that his performance against Brentford was responsible for the defeat.

“I think I cost three points to my team today to be honest, “he said after the game.

“It was a poor performance from myself. Of course, after the first mistake and the second, it was very tough for the team to get playing. It was a horrible day.”

Ten Hag also said he wanted to substitute his entire team at half-time after his side’s defeat to Brentford.

“I subbed three but I could’ve changed them all. We will learn, we will have to learn, it’s not good enough and it’s not the level and the standard of how we want to act.”

However, some of the fans believe the club may have hit rock bottom following their recent setbacks and need absolute patience with the team to revive the club back to its glory days under Sir Alex Ferguson.

Former England striker, Alan Shearer, said on BBC Match of the Day, “It is an absolute mess. Years of failure and years of mismanagement as there is a lack of leadership and the recruitment has been terrible.

“It will take time and an unbelievable amount of money to get things right, and a lot of patience from the Manchester United fans. They are miles away from where they want to be.”

Omowunmi Kossi, a Togolese entrepreneur based in Nigeria said, “My neighbour is also a Manchester United fan, but I’ve been finding it difficult to say ‘hi’. Do I wave from a distance or ignore him?

“Much as I like this Manchester United team and Ten Hag, he (Ten Hag) does not know what to do to make it better. So sad for him but it is not a good start for us as fans who follow the team passionately. The board must bring in good players for the coach and have patience with him. So many clubs went through this phase and I believe they will be better afterwards.”

Ayo Okelola, a staff of the Lagos State Vehicle Inspection Service, said, “Manchester United as a club is completely broken. Reputations and careers for both players and managers go there to die. If I was Ten Hag I’d genuinely resign after this. He needs to get out now before his reputation is shredded.”

However speaking about the team’s next game against Liverpool, the fans believe that Ten Hag’s problems could get worse as his team next face Liverpool, who thrashed United on both meetings last season.

Adewale Atanda, a Nigerian Ports Authority staff, admitted that it would be difficult for United to compete for titles this season, following their terrible start, but added that a point against Liverpool could spark a revival.

“It is going to be tough I must admit. Nothing good is coming out of Old Trafford because the people running the club are already old and out of ideas. I feel the team needs good players and time to show what they can achieve. It’s a bad phase, I must tell you as a Manchester United fan, but we will bounce back.”

Okelola added, “It will be tough against Liverpool because despite the fact that they are without a win you could see some spark in the team, but United don’t have that and they do not show or offer that. I hope it ends in a draw that will be fine but a win will further deceive us that the team’s problems are over.”

Ahead of Monday’s game, Kossi, said, “It could go anyway because it’s football but based on play and form, Liverpool has a massive advantage but I don’t pray for another Brentford capitulation.”

Paul Akoni, a businessman, also said the Reds would get their first win of the season against the fumbling Old Trafford side.

“I don’t think United have the team to defend well against Liverpool with Harry Maguire leading the backline. No! There are lots of problems with the team. The transitional play is very poor and why must we rely on Ronaldo for goals? It has not been this bad that a club like United rely solely on a player to lift the side.”