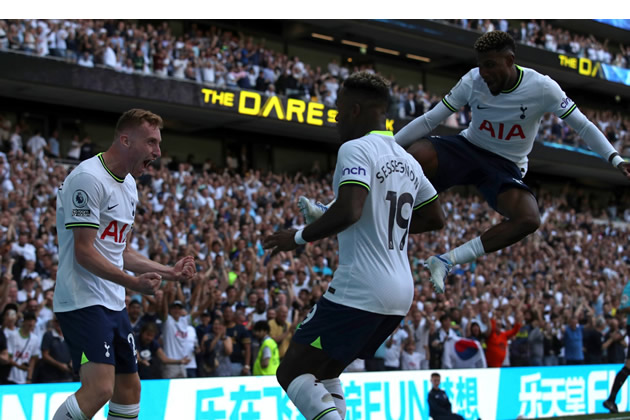 Tottenham delivered on their pre-season hype by thrashing Southampton 4-1 during the English Premier League football match on Saturday.

Tottenham had a dream start to the campaign to raise hopes they could compete for a first league title in 61 years.

Spurs also fell behind to James Ward-Prowse’s strike from the edge of the box after just 12 minutes, but the response from Antonio Conte’s men was emphatic.

The goals to turn the game around before half-time came from unlikely sources as Ryan Sessegnon and Eric Dier headed home.

Mohammed Salisu then passed the ball into his own net for a comical own goal on the hour mark.

Dejan Kulusevski rounded off the scoring with a cool and precise finish into the far corner to take Spurs above Arsenal at the top of the table.

Newcastle may not have delivered the big-name signings many expected in the transfer market, but the Magpies did the business on the pitch to spoil Nottingham Forest’s return to the English top flight with a 2-0 win.

Forest have even outspent Newcastle in the window on 12 new signings so far, but were given a lesson in the step up in quality to the Premier League at St James’ Park.

Bournemouth were also 2-0 winners over Aston Villa, dispelling their pre-season gloom after a lack of transfer activity.

Jefferson Lerma got the Cherries off to a great start after just three minutes and Kieffer Moore added a second 10 minutes from time.

Leeds shrugged off the loss of Kalvin Phillips and Raphinha over the summer as they beat Wolves 2-1 at Elland Road.

Daniel Podence had fired Wolves into an early lead, but Jesse Marsch’s men fought back impressively.

Rodrigo blasted in from a narrow angle to level before Rayan Ait-Nouri’s own goal decided the game 16 minutes from time.

Chelsea begin their campaign later on Saturday away to Everton.