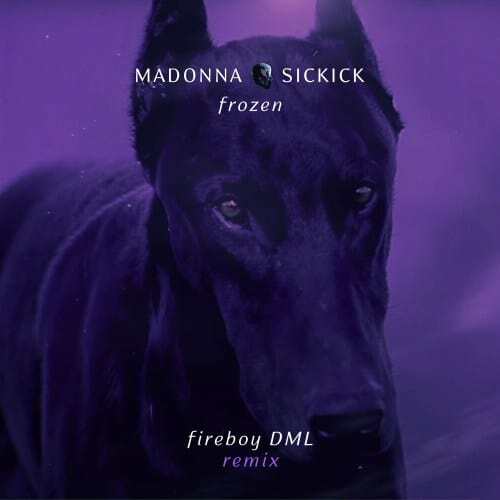 Listen to Madonna Vs Sickick’s FROZEN The Fireboy DML Remix. Original song taken from the ‘Ray Of Light’ album released on Warner Bros. in 1998.

Madonna have released a new version of Frozen that became a TikTok hit last year, featuring Nigerian Afrobeat singer, Fireboy DML. This is the second remix of the 1998 classic. Check it out below as an official video will follow soon, according to a press release.

As the best-selling female recording artist of all time, Madonna continues to leave an indelible mark on the world through her art, music, activism and humanitarian leadership. Madonna consistently pushes boundaries, spurs conversations and unites us all through her revolutionary work.

The Fireboy DML–featuring remix is producer by Canadian producer Sickick.

Earlier in the week, Madonna and Fireboy raised eyebrows with an Instagram post of their close up photos.

Bobrisky’s Ex PA, Oye Kyme Shares How Her Love For Money And Fame Marred Her

- June 29, 2022 0
Actress, Chacha Eke Faani’s Husband, Austin has labeled his estranged wife a liar and claims that he has never been violent. It will be...

‘I Was Insistent On Living My Youthful Extravagant Life, When I Got Pregnant’ –...

- June 29, 2022 0
Nollywood actress and billionaire’s wife, Regina Daniels has opened up on how motherhood has changed her as she celebrates her son’s birthday today.In the lengthy...

- June 29, 2022 0
Mohammed Al’amin, one of the passengers of the Abuja-Kaduna train that was attacked by terrorists in March has been shot in captivity. According to...

- June 29, 2022 0
Actor IK Ogbonna Bags Doctorate Degree In Leadership And Development Nigerian actor, Ik Ogbonna could not contain his excitement as he received an...

What About A Country Ruled By Yahoo Men – Erigga Asks After EFCC Prescribed...

- June 29, 2022 0
What About A Country Ruled By Yahoo Men – Erigga Asks After EFCC Prescribed 15 years Imprisonment For Landlords Who Rent Their Houses...

- June 29, 2022 0
Numerous individuals, including a medical professional by the name of Dr. Mansur Mohammed, have been kidnapped by the notorious bandits operating in Zamfara...

I Have Never Raised My Hands On Any Woman Including My Wife – Chacha...

- June 29, 2022 0
I Have Never Raised My Hands On Any Woman Including My Wife – Chacha Eke’s Estranged Husband, Austin Faani Breaks Silence Austin Faani, the...

- June 29, 2022 0
Bobrisky‘s former personal assistant, Oye Kyme has shared how her insatiable love for fame and money has ended up destroying her life. Oye became...

Bobrisky Reacts To Allegation Of Not Paying The DJ Who Played At His N400...

- June 29, 2022 0
Controversial Nigerian crossdresser Idris Okuneye popularly called Bobrisky has reacted to the allegation of not paying the DJ that played at his N400 million housewarming...

What I Learnt After Taking Break From Social Media – BBNaija Star, Peace Reveals