Home Celebrity Gist Lagbaja Joins Rema On Stage For A Wonderful Performance At The 2022... 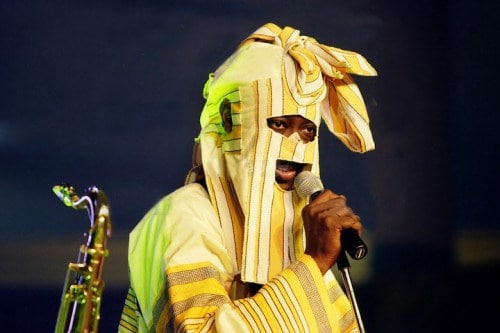 Who would have thought that music fans would ever see Lagbaja and Rema performing together on a stage.

Legendary AfroJazz musician, Lagbaja joined Rave Lorde, Rema on stage last night at the AMVCA 2022 Award ceremony while Remmy boy was one of his new releases, ‘Are You There‘.

Lagbaja came on stage with his Saxophone and gave Rema’s Are You There an AfroJazz feel. While fans were still trying to gather their emotions at the surprise, Lagbaja and Rema did a transition from Are You There to one of Lagbaja’s 2000 hit songs, “Gra Gra” and the audience screamed out loud.

The masked one got all #AMVCA8 audience on their feet to dance to his popular ‘Konkobilo (go go below)‘ after Rema left the stage. Lagbaja’s performance last night also brought back nostalgic moments of Ego Ogbaro songbird’s voice. He got all celebrities at the 2022 AMVCA and fans at home asking for a concert.

Watch the performances below;

The post Lagbaja Joins Rema On Stage For A Wonderful Performance At The 2022 AMVCA first appeared on tooXclusive.