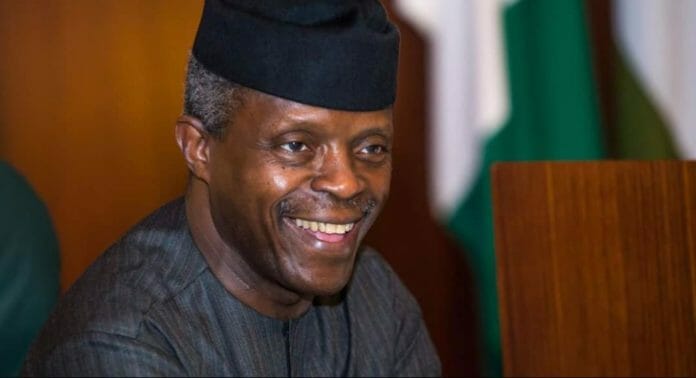 Nigeria’s vice president, Yemi Osinbajo has stated that the Buhari regime and the governing All Progressives Congress remain committed to the welfare of the common man because it is a party of the people and will continually ensure that the common man benefits maximally from the government.

This was stated on Friday by Osinbajo when he received on a courtesy call, a delegation of the APC Professionals Forum at the Statehouse, Abuja.

Senior Special Assistant to the Vice President on Media and Publicity, Laolu Akande, disclosed this in a statement he signed on Saturday titled ‘Why APC is focused on the common man’s welfare, by Osinbajo’.

Though formed about nine years ago, the Vice President noted that the party has made an impact and is determined to improve the wellbeing of Nigerians.

“We are the ruling party in Africa’s largest democracy which by itself is a phenomenal achievement for such a young party. But you’ll find that in the particular ideological direction of our party, it’s one that it was clear to the founders of the party, the initial persons and groups that came together to form the party and they came from different parties. Still, it was to present a left of centre, a social democratic alternative to the ruling part.”

Osinbajo further stated that the APC is determined to ensure the country’s further growth and development, noting that the party “carries with it, the hopes and expectations of millions of Nigerians.

According to him, the party is not a mere platform for running for political office, it carries with it the hopes and expectations of millions of Nigerians “and we must make it a place where they are comfortable, a place where they feel this belongs to us. We can even put our resources into it; it is not just for politicians; it is for us all.”

To the visiting delegation, he said, “It is the role this Professional Forum must take on to itself. And what it entails aside from that logical objective of the Forum; what it entails is defining in writing in various ways what our party stands for.

“There are many people that say, well, we have not done this, we have not done that. There are so many ways of looking at it, but the truth of the matter is that the party was committed and is seen across the country as a party of the common man, which is why I think the role of the Professionals Forum is particularly important because we are trying to shape the ideology of the party.

“If the professionals cannot do that, then our party becomes all comers; anything goes so long as we have a platform to run for political office. But I think that we, especially professionals, have a unique advantage.”

Osinbajo expressed hoped that the Forum, made up of professional elites, will be of great benefit to the party and Nigeria because of its leadership and quality of professionals on its board of trustees and as members, who he noted “are not just politicians, but people who have distinguished themselves” in their respective fields.

The post Osinbajo explains why APC is party of the common man appeared first on NEWS.