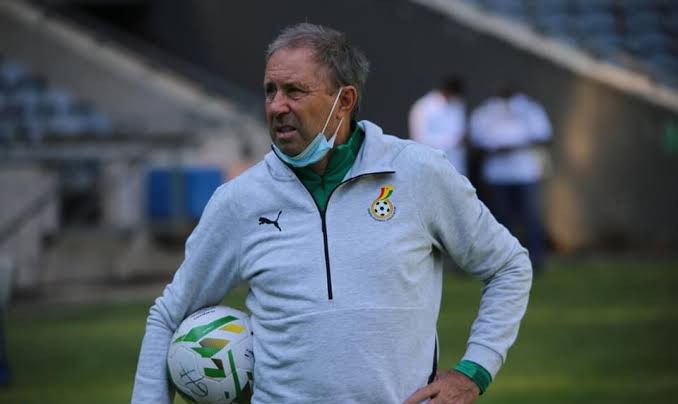 Coach of the Ghana National Men’s Football Team, Milovan Rajevac, has vowed not to resign despite their humiliating exit in the group stage of the ongoing 2021 Africa Cup of Nations.

The Serbian disclosed this at a news conference after Comoros Island defeated the Black Stars 3-2 leaving them bottom of the table, to bundle them out of the tournament.

Ghana suffered a humiliating group-stage exit at the AFCON after the four-time champions were beaten by debutants Comoros Island in the final Group C game at the Stade Roumdé Adjia on Tuesday night.

The 68-year-old gaffer, however, said he had just a few months to put the team together and was adamant that with more time, he plans to qualify the Black Stars for the 2022 Qatar FIFA World Cup later in the year.

“I am not leaving. I want to stay and qualify Ghana to the World Cup.

“We didn’t start the game against Comoros how we wanted and we conceded an early goal.

“It was a poor start for us and then the red card to Andre Ayew changed everything.

“I think Comoros deserved this win because they played very well than us,” the coach said.

Rajevac led the Black Stars to the AFCON final in 2010 and the World Cup quarter-finals the same year, and guided the four-time African champions through to Africa’s play-offs for this year’s World Cup.

“I Contributed To Most Of The Songs That Won At The VGMAs”-Kuami Eugene Speaks...

- May 20, 2022 0
British singer, Ed Sheeran and his wife, Cherry have welcomed a 2nd baby girl. The bad habits crooner shared the news via his official...

- May 20, 2022 0
A close friend of the Influencer revealed that the security guard took Papaya’s three phones, clothes as well as jewellery. “The security official of...