In the Nigerian music scene, there are megastars, veteran stars, breakout stars and more. But of all these, none have had as good a run as Olamide Adedeji who is popularly known as Olamide. The street hop rapper is one who 10 years ago, went from being a breakout star to being a superstar, dishing out seismic hit after hit while running a record label with which he has now attained godfather status and veteran stardom.

On the 18th of June, the hip-hop maestro is set to drop a new album, Uy Scuti, which will be his 10th studio album since he released his career-defining Rapsodi in 2011. A walk through his extensive discography will highlight the rapper’s eclectic nature with some album titles naturally reflecting his humble street background as well as his hip-hop leanings. While there have been some deviant titles such as 999 and his previous work, Carpe Diem, which is an ode to living in the moment. 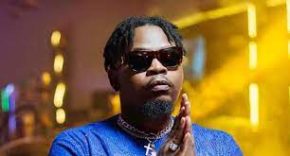 Yet Uy Scuti remains a very obvious deviant and for many, is a new word that leaves them with questions on its meaning and significance. If you’re one of the many, this article is for you.

What is the Meaning of Uy Scuti?

Uy Scuti is the largest star in the universe. It is so large that it is referred to as a hypergiant star which is a classification for stars that comes after the terms giant and supergiant.

Simply put, a hypergiant star is a very rare type of star that shines very brightly.

Discovered 161 years ago by German astronomers, Uy Scuti is so large that its radius is around 1,700 times larger than the sun. This in turn makes its volume about 5 billion whopping times that of the sun.

In fact, if this hypergiant star were to replace the sun in the center of the solar system, it’s photosphere– the luminous energy of a star radiated by it’s light and heat– would extend just beyond Jupiter’s orbit, which is the 5th planet from the sun.

An interesting fact about Uy Scuti is that it is a variable star as it was noticed to have gotten brighter and dimmer over a period of 740 days when observed. It also has some contenders for its spot as the largest star, but so far sits in the number one position in the universe.

The star was named Uy Scuti as it is the 38th variable star of the Scutum constellation.

What is the significance of the star to the upcoming album?

While many Nigerians contend Olamide’s status in the Nigerian music industry, it remains an undeniable fact that he is one of the biggest Nigerian stars of the decade.

Similar to Uy Scuti’s outstanding brightness, Olamide has also with his star power, shed light unto the industry through his artistry and by lending his support to several artistes in time past, helping them find their to the top.

Such stars include but aren’t limited to Fireboy DML, Bella Shmurda and P. Prime.

ALSO READ: “Olamide is Not A Fantastic Artiste”- Read How Twitter Users Defend His GOAT Status

A glance at his tracklist will also show that he’s double-featured underground RnB sweetheart, Fave, signalling her as the next possible act to gain a co-sign from him if all turns out well.

Also like Uy Scuti, Olamide, has had eras of varying brightness in between his impressive catalogue, with periods where he dominates the airwaves with hit singles as well as moments where he entertains fans with his versatility on yearly album releases. The star however took a break from album drops in 2018 and 2019 whereas in 2016, he’d hit the scene with two projects.

It’s year 2021 and in two day’s time, Olamide is poised to dazzle the scene again, this time with Uy Scuti. And from all indications, it will be a manifestation of his status as a hypergiant in the Nigerian musicsphere.

BBNaija 2021:- Whitemoney Trends After Revealing He Was Once The Cover Of A Popular...

BataTV - August 4, 2021
0
BBNaija 2021:- Whitemoney Trends After Revealing He Was Once The Cover Of A Popular Magazine BBNaija housemate, Hazel Oyeze Onou who is known as...