Nigerian megastar, Wizkid has made a comment to a funny image or meme on the blue bird app, Twitter and it may seem that the singer is about to release another album. 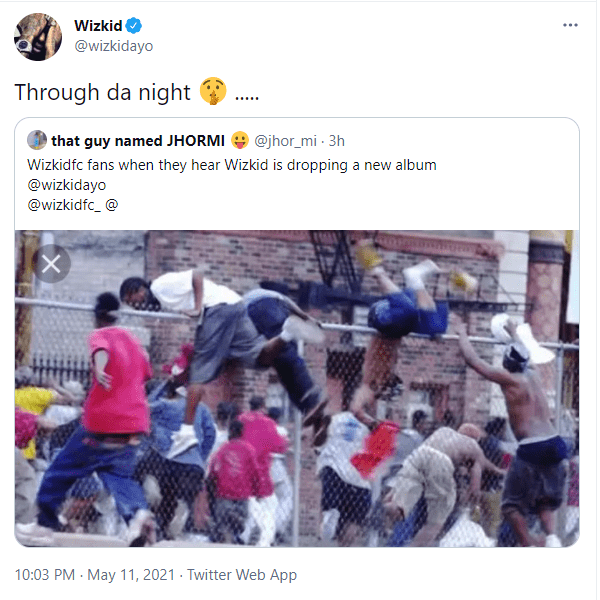 This came to play when the singer replied to a meme posted by a member of his fanbase, Wizkid FC. The meme which painted a hypothetical scenario of how Wizkid fans would feel if he dropped a new album, said “Wizkidfc fans when they hear Wizkid is dropping a new album.” Wizkid then replied by simply saying, “through da night” while adding a hush emoji.

The tweet which was made on the 11th of May has since garnered a lot of traction on the social media platform as well as different shades of reactions from Wizkid fans. Here’s how some fans reacted to Wizkid’s tweet:

What do you think of Wizkid’s album tweet? Do you think he’ll be putting out an album or a single or he’s simply teasing his fans?

The post Did Wizkid Just Promise To Drop An Album This Night? See Fans’ Reaction  appeared first on NotjustOk.

The post Did Wizkid Just Promise To Drop An Album This Night? See Fans’ Reaction  appeared first on Tunde Ednut.

BataTV - June 16, 2021
0
The world is evolving and young writers are growing large and large in numbers. A young Nigeria entrepreneur Adike Wisdom Izuchukwu who made...

“Be Careful Of Buying Creams From Actresses,” Shade Ladipo Warns

Euro 2020: Rudiger opens up on alleged biting of Pogba in France, Germany game

Fans Are Pressuring Me To Get Married – Seyi Shay

BataTV - June 16, 2021
0
Seyi ShayNigerian Afro-pop singer, Oluwaseyi Deborah Joshua, alias Seyi Shay, has said that fans are pressuring her to get married and have kids.The...

Euro 2020: Pogba to be punished following France’s 1-0 win over Germany

BataTV - June 16, 2021
0
France midfielder, Paul Pogba, could be in trouble with UEFA, after he appeared to breach COVID-19 protocol, by mingling with the crowd after...

Santi Confirms The Completion of His Forthcoming Album

BataTV - June 16, 2021
0
Nigerian musician Osayaba Andrew Ize-Iyamu popularly known as Santi has confirmed that his forthcoming album is done and set for release. Santi The singer-rapper who...

BataTV - June 16, 2021
0
The fixtures for the 2021/2022 Premier League season have been released. Here is the opening weekend of Premier League fixtures, including a mouth-watering clash...

5 Iconic Hits From The “Superstar” Album by Wizkid

BataTV - June 16, 2021
0
Wizkid’s ‘Superstar’ album is a Titan among classics in the Nigerian music industry. It signaled a change in Afrobeat music trajectory, and everyone who...

BataTV - June 16, 2021
0
Nigerian singers, L.A.X and Davido have unveiled the official music video for their latest collaboration. The song which was released just recently is...

BataTV - June 16, 2021
0
One of Nigeria’s foremost rappers Remilekun Abdulkalid Safaru, popularly known as Reminisce, has announced that he will be dropping his fifth studio album. Reminisce READ ALSO-...