Sunday Japhet, an officer with the Nigeria Police, who said Nigeria was being led by evil people, has been arrested by the Yobe State police command.

Japhet had complained about being owed salaries.

He also complained of the recent murder of three policemen by soldiers in Taraba.

Japhet posted: “O God! My country, so, is it that if mobile police on special assignment did (do) not protest and tell the whole world that they have no been paid, police authority or federal government of Nigeria will not pay them? I pray this very protest on 14 will bring the attention of those we have in mind to speak for us.

“This is Nigeria, with a president who wants to fight corruption and tackle insecurity, with his vice who claims to be a man of God without truth, with many elected senators, with IGP that we think things will change (under him), it’s a pity for them.

“Those that lead this country, I pray that this demonstration that is going to happen on 14 /8 in Maiduguri, Yobe, Adamawa and other places that mobile police on special duty are going to hold for their allowances the beginning of something in this great country led by evil men.

“We are inviting all the media to be there for us, this people call their self leaders are all aware that this money use to be in some people joint account to get interest,then after 3-4 month they pay, no one will say he doesn’t know what is happening that this money is not paid. God will come down himself to help Nigerian if really this is Buhari handling this country this way, I better die for truth then to be, seeing nonsense.

“All that people fear is death, death, what nonsense? Is Buhari grandpa or grandma alive? Is Osibanjo grandpa alive? Is everyone that ever lead this country alive? That’s show everyone will die and I’m sure of it. Then, what nonsense death are people afraid to stop them not to say the truth for God sake?”

On the killing of his colleagues by some soldiers, Japhet called for revenge.

“The activities of illiterate so-called army (soldiers) of a country Nigeria is out of hand. I swear, we have to just make a revenge mission, You are a liar if you say soldiers can stand mopol (mobile policemen). We are not ready to listen to our officers saying ‘calm down’ while so-called army officers are defending their boys. Those guys can’t just be killed leaving their families to suffer like that.” 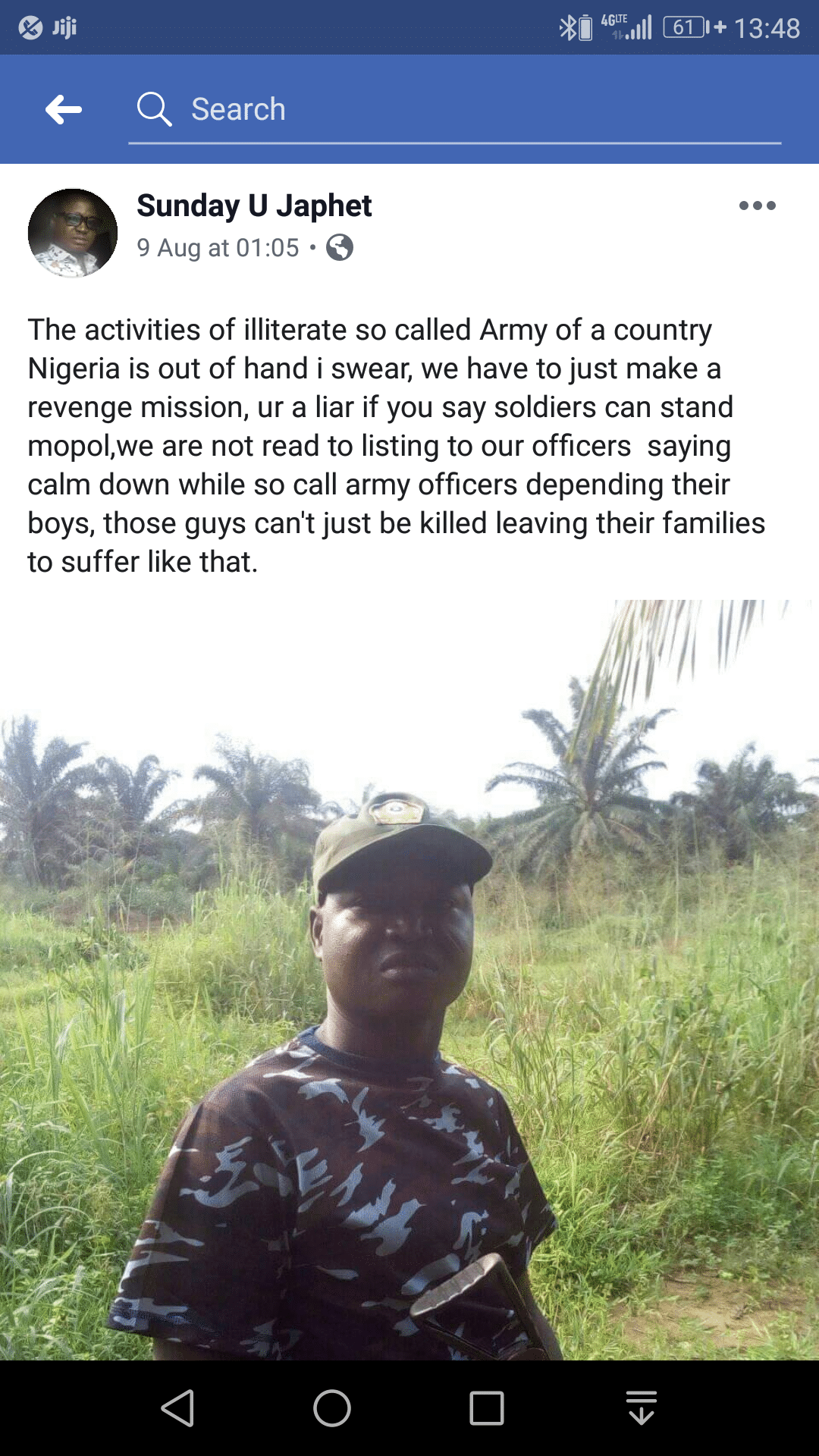 You’re Being Misled By ‘Confused’ Leadership

BataTV - May 31, 2020
0
On air personality, Afia Pokuaa otherwise known as Vim Lady in the media circles is convinced that the 2020 presidential elections will be...

You Are Full Of Shit

BataTV - May 31, 2020
0
The young billionaire wife, Regina Daniels was the centre of attraction on instagram yesterday as photos and videos of her baby bump hit...

BataTV - May 31, 2020
0
Tough-talking Counselor, Lutterodt says he intends to break the virginity of Ghanaian Gospel musician Patience Nyarko.According although, he’s already married, he has his...

BataTV - May 31, 2020
0
Singer, Tiwa SavageNigerian singer Tiwa Savage has reacted to the death...

Checkout The Savage Reply Davido Gave To Jude Okoye And Rudeboy When They Asked...

BataTV - May 31, 2020
0
‘Na this matter we don dey settle since’, Daddy Freeze hysterrically said after Davido savagely replied Jude Okoye and his brother, Rudeboy after...

Nollywood Stars Who Have Died In 2020 (Photos)

BataTV - May 31, 2020
0
Nollywood started recording the deaths of its practitioners in 2020 with the death of actress Jennifer Omole who passed away on January...

BataTV - May 31, 2020
0
It’s no surprise that Meraiah, affectionately know by her peers as Mimi has taken after the fastidious life of her evergreen mother, Omotola...

BataTV - May 31, 2020
0
Yvonne NelsonPopular Ghanaian actress, Yvonne Nelson, has shared her opinion on...

BataTV - May 31, 2020
0
An unidentified lady got more than she bargained for after was allegedly caught stealing from a shop she stole from the previous...